Soemon-cho is located in Chuo-ku, Osaka, Japan and neighbors the Dotonbori, Ebisubashi, and Shinsaibashi shopping arcades. It is one of the entertainment districts representing Osaka and constitutes a regional commercial complex with more than 600 stores centering on restaurants.

Osaka Minami Soemon-cho, a town with a history of more than 400 years 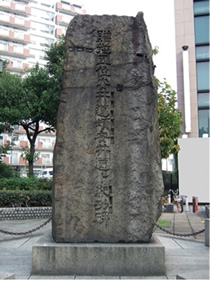 Soemon-cho has a long history dating back to the Edo period. In 1612, Nariyasu Doton, a member of a local clan of Hirano-go (current Hirano-ku, Osaka), built a canal connecting the Higashiyokobori River with the Kizu River by using a stream (Umezu River) flowing from the Uemachi Plateau. While Doton died shortly before the completion of the canal in 1615, Yasui Doboku and others took over his work and completed it in November 1615. At the time, the canal was called Minamihorikawa, but was later named Dotonbori River in honor of Doton, who used his own fortune on the excavation work.
Along with the excavation work, town houses were built on both banks of the river, which is the origin of Soemon-cho. Later, the Edo shogunate put Osaka under its direct control and developed the eastern part of the confluence of the Dotonbori River and the Nishiyokobori River, giving rise to eight towns collectively called Kawahaccho (Hotei-cho, Soemon-cho, Omae-machi, Kyuzaemon-cho, Kichizaemon-cho, Ryukei-machi and Kuroemon-cho).

It is said that Soemon-cho was named after Yamanoguchiya Soemon, a town official in the middle of the 17th century. While there was another Soemon-cho on the western bank of the Nishiyokobori River at the time, the name was later changed. There is a historical record that says that Soemon-cho, which was loved by many people, had 27 licensed chaya (entertainment teahouses) in 1703, demonstrating that Soemon-cho prospered as “an entertainment district" in the Edo period.

The town that has developed with the Dotonbori River

In 1626, theaters and licensed quarters were moved from Kanshiro-cho (the current Minami-senba area) to the southern bank of the Dotonbori River, and since that time Dotonbori has prospered as “a town of theatrical entertainment (Yagura-cho)."It was around this time that the unique culture associated with rivers began to emerge, such as Fune-norikomi which refers to actors coming to theaters by boat and entering from the doors on the river side, leading to the development and establishment of the area around the Dotonbori River as a district featuring a culture of townspeople. It is said that the practice of people who enjoyed plays on the south bank of the Dotonbori River (the area around Dotonbori) moving to the north bank (the area around Soemon-cho) to have something to eat and drink began around that time. At the time, many Kabuki actors used to live in Soemon-cho. 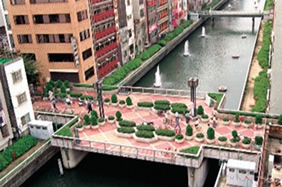 Soemon-cho has a long history dating back to the Edo period. In 1612, Nariyasu Doton, a member of a local clan of Hirano-go (current Hirano-ku, Osaka), built a canal connecting the Higashiyokobori River with the Kizu River by using a stream (Umezu River) flowing from the Uemachi Plateau. While Doton died shortly before the completion of the canal in 1615, Yasui Doboku and others took over his work and completed it in November 1615. At the time, the canal was called Minamihorikawa, but was later named Dotonbori River in honor of Doton, who used his own fortune on the excavation work.
Along with the excavation work, town houses were built on both banks of the river, which is the origin of Soemon-cho. Later, the Edo shogunate put Osaka under its direct control and developed the eastern part of the confluence of the Dotonbori River and the Nishiyokobori River, giving rise to eight towns collectively called Kawahaccho (Hotei-cho, Soemon-cho, Omae-machi, Kyuzaemon-cho, Kichizaemon-cho, Ryukei-machi and Kuroemon-cho).

Since the bridge was also called Enkiri Bridge (breaking off a relationship with someone), people in hanamachi (the district where courtesans and geisha used to live and work) and wedding processions avoided using the bridge. Another derivation is that in cases where a woman in love with someone is forced to work in hanamachi, where she will have to serve many customers, the bridge symbolizes the place where the woman “breaks off a relationship with herself" as an ordinary person in love and becomes a person working in hanamachi.

The Town where the Culture and Fashion of Osaka are born

In the Meiji period, Soemon-cho became famous as one of the Nanchi Gokagai (Soemon-cho, Kuroemon-cho, Yagura-cho, Saka-cho, and Namba-shinchi), where there were many high-class Japanese restaurants and long-established chaya. In addition to restaurants, there were many chaya-related shops, such as hairdressers, wig shops and yukata stores, as well as latticed houses, such as public bathhouses, laundries and inns. At the time, Soemon-cho had cobbled streets, on which geisha used to walk while rattling their wooden clogs. Willows and latticed buildings, such as restaurants with verandas to enjoy a cool breeze, laundries, and inns, lined up on the north bank of the river, creating a tasteful and charming atmosphere.

At that time, the Shimanouchi district (the beach side) to the north of the Dotonbori River was positioned as an upscale district, and the opposite southern part was as a popular social district. In particular, Soemon-cho was known as the most prestigious hanamachi where big chaya, such as Tomita-ya, Itako and Yamato-ya, enjoyed prosperity. Chaya at that time played a role not only as a place of entertainment, but also as a social function where the major merchants of Senba exchanged information and had get-togethers. The elaborate dishes served at these chaya further promoted the reputation of Osaka as a city of extravagant food and the kimonos of the geisha were the envy of other women. Soemon-cho is said to have always enjoyed public attention as a source of Osaka’s culture and fashion.

Going to Soemon-cho, a Symbol of Wealth and High Social Status 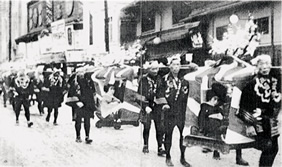 In the Taisho period, along with economic and industrial development, the “chaya culture" spread and Soemon-cho prospered more than ever. In Osaka, where trade using rivers as a means of transportation has long been practiced, there was a custom among merchants of holding parties in appreciation of the great pains watermen had taken. Therefore, as commerce flourished in Osaka, more parties were held and the number of chaya and rooms for rent increased. At the time, it is said that there were about 600 geisha, some of whom even became known nationwide as successful, sought-after geisha. In such a context, competition among chaya intensified, leading to the survival of only high-quality chaya with refined geisha, and Soemon-cho became a prestigious hanamachi. Along with the development of the town, going to Soemon-cho and being the subject of romantic rumors with the geisha there became a status symbol of the wealthy merchants and a way to become famous. 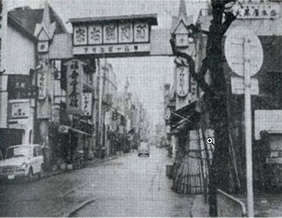 Nanchi-Gokagai around 1935 was home to 750 chaya, 2,800 geisha, and 1,800 courtesans. However, the Pacific War, which broke out in 1941, began to affect the area around Soemon-cho: Theaters in Dotonbori on the opposite bank closed one after another and in 1944, many chaya in Soemon-cho received a municipal order to evacuate the area and were forced to close up shop. In addition, the Osaka Minami area was significantly damaged in the great Osaka air raid in the following year. After the war, although it was not as vibrant as in the past when it was called "the trendiest town of all, "Soemon-cho revived as a town with many chaya and restaurants. The sounds of practicing samisen and hand drums were heard here and there in the evening and geisha practicing dances could be seen through lattice doors. It is said that these scenes and the "oyster boats" on the Dotonbori River represented the attractive atmosphere unique to Soemon-cho and its surrounding area.

Entering the high economic growth period, people’s approaches to entertainment changed drastically and chaya and fancy Japanese restaurants were replaced by bars and cabarets. While the number of chaya gradually decreased, there were more than 70 Japanese restaurants in the area surrounding the Dotonbori River from the late 1970s to the early 1980s, many of which were in Soemon-cho.

A song called Soemoncho Blues (by Katsuji Heiwa and Dark Horse) released in 1972 became a big hit, selling two million copies. While transforming itself with the times, Soemon-cho has always been loved by many people as a lively downtown representing Japan and attracted many visitors from around the country. 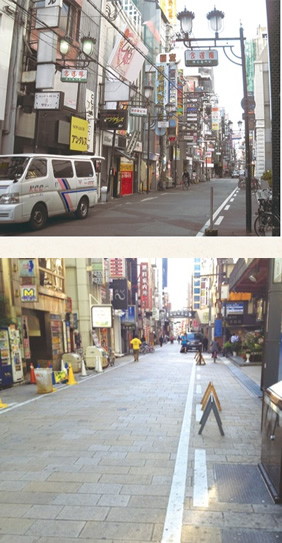 Soemon-cho is called "Osaka’s night center" since it is one of the most famous downtown areas in Japan with more than 700 stores in the shopping district of approximately 2.5 hectares (stretching 500m from east to west), where most shops are open from evening to midnight.

In recent years, the first Kansai stores of global companies and new stores of leading domestic store chains have opened in Soemon-cho. There is also a wide range of restaurants, bars, retail stores, and services, including those listed in the globally famous Michelin guidebooks, which have supported and developed the food and sake culture unique to Soemon-cho.

Soemon-cho and a number of stores doing business in the town have joined forces to rise above the hardships and tribulations of this age, such as the advent of a global society, including chaotic world economy after Lehman’s fall and ever intensifying global competition, as well as disasters of unprecedented scale, such as the Great Hanshin Earthquake and the Great East Japan Earthquake.

As a town that cherishes its history of more than 400 years, Soemon-cho makes the following efforts toward its bright future under the town development concept of "Soemon-cho blessed with Good Food, Sake, and Rivers" a large-scale townscape development, including beautification of cobbled streets and the development of riverside paths along the Dotonbori River. While flexibly responding to increasingly complex social changes and the diversification of the preferences and tastes of people, together with taking action against immoral business practices, Soemon-cho will continue its ongoing efforts to protect, cherish and develop its unique culture and regional characteristics to become a town loved and visited by many people from Japan and around the world.

Date of Event: January 10 (provisional) of each year 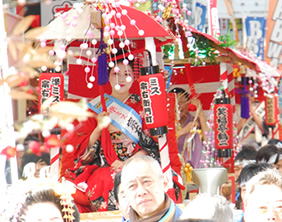 Rice-Cake Making to Ward Off Evil

Date of Event: February 3 (provisional) of each year

While reproducing the custom of "Obake (a sort of masquerade festival)" in Nanchi Hanamachi in a modern manner and following the family tradition of throwing beans and eating Ehomaki (rolled sushi) on the day of Setsubun (the day before the beginning of spring), rice cakes are made with and given out to visitors (in a sweet soup or with soybean flour) after praying to the guardian deity to keep families safe, ward off evil, and invite luck and success in business. This is a small but meaningful tradition unique to the shopping arcades of Soemon-cho that has continued for more than 20 years. 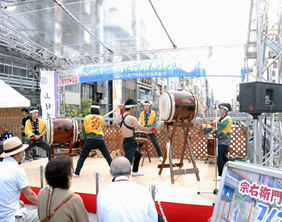 The Soemon-cho Summer Festival is the largest annual event of the shopping arcades of Soemon-cho. Each year, about 3,000 to 4,000 visitors come to enjoy it. As the core part of the "Summer Beer Festival," an outdoor beer hall project is conducted, and includes performances by a variety of musicians and performers on the outdoor live stage, as well as booths of famous and popular stores in the arcades. Other beer-related programs are also conducted, adding to the festive mood. 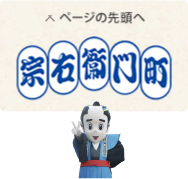